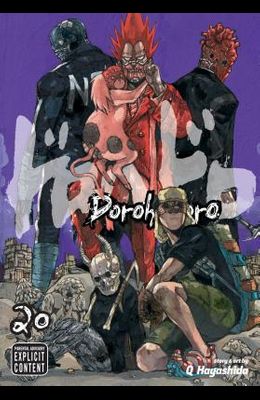 A twisted tale of sadistic Sorcerers and the monsters they create, and the man with a reptile head who's hunting the Sorcerers and igniting a grim and gruesome war between two worlds. In a city so dismal it's known only as the Hole, a clan of Sorcerers has been plucking people off the streets to use as guinea pigs for atrocious experiments in the black arts. In a dark alley, Nikaido found Caiman, a man with a reptile head and a bad case of amnesia. To undo the spell, they're hunting and killing the Sorcerers in the Hole, hoping that eventually they'll kill the right one. But when En, the head Sorcerer, gets word of a lizard-man slaughtering his people, he sends a crew of cleaners into the Hole, igniting a war between two worlds. Inside the nightmare surrounding the Central Department Store, the long-absent En returns, making his family's wish come true But its faithful members are either dead or dismembered, so if En wants to start over, can they even do anything to help him? Elsewhere, Caiman is battling the boss of the Cross-Eyes, Nikaido has been captured and Kasukabe is nearly dead. Then, in a life-or-death situation, something inexplicable happens to Caiman