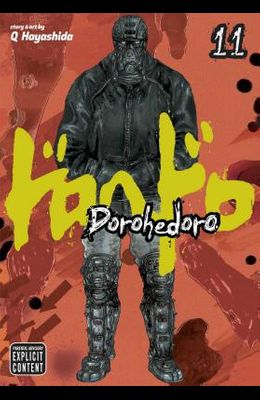 A blood-spattered battle between diabolical sorcerers and the monsters they created. In a city so dismal it's known only as the Hole, a clan of Sorcerers has been plucking people off the streets to use as guinea pigs for atrocious experiments in the black arts. In a dark alley, Nikaido found Caiman, a man with a reptile head and a bad case of amnesia. To undo the spell, they're hunting and killing the Sorcerers in the Hole, hoping that eventually they'll kill the right one. But when En, the head Sorcerer, gets word of a lizard-man slaughtering his people, he sends a crew of cleaners into the Hole, igniting a war between two worlds. Caiman finds his true face, and the person who cursed him is revealed, shaking the world to its foundation The severely injured Nikaido's heath is draining perilously. Meanwhile, En may just possibly have met his match. What drives him? A dark secret known to none save En himself... Reads R to L (Japanese Style) for mature audiences.