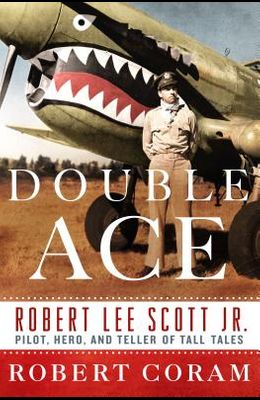 Robert Lee Scott was larger than life. A decorated Eagle Scout who barely graduated from high school, the young man from Macon, Georgia, with an oversize personality used dogged determination to achieve his childhood dream of becoming a famed fighter pilot. In Double Ace, veteran biographer Robert Coram, himself a Georgia man, provides readers with an unprecedented look at the defining characteristics that made Scotty a uniquely American hero. First capturing national attention during World War II, Scott, a West Point graduate, flew missions in China alongside the legendary Flying Tigers, where his reckless courage and victories against the enemy made headlines. Upon returning home, Scott's memoir, brashly titled God is My Co-Pilot , became an instant bestseller, a successful film, and one of the most important books of its time. Later in life, as a retired military general, Scott continued to add to his list of accomplishments. He traveled the entire length of China's Great Wall and helped found Georgia's Museum of Aviation, which still welcomes 400,000 annual visitors. Yet Scott's life was not without difficulty. His single-minded pursuit of greatness was offset by debilitating bouts of depression, and his brashness placed him at odds with superior officers, wreaking havoc on his career. What wealth he gained he squandered, and his numerous public affairs destroyed his relationships with his wife and child. Backed by meticulous research, Double Ace brings Scott's uniquely American character to life and captures his fascinating exploits as a national hero alongside his frustrating foibles.