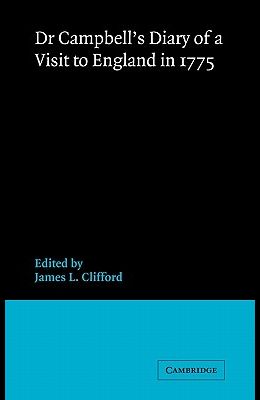 Dr Campbell's Diary of a Visit to England in 1775

Originally published by Cambridge in 1947, the manuscript upon which this volume is based lay dormant between the time of its creation and 1854, when it was discovered in an office of the Supreme Court in New South Wales. Whilst it is a concise account, written by the little-known Irish clergyman Thomas Campbell (1733-1795), it is notable for its frank description of encounters with Samuel Johnson. Campbell is unsparing in relating the crass aspects of Johnson's behaviour, such as his temperamentality and use of bad language, along with his manifold qualities. The text is consummately edited by James L. Clifford, with extensive notes, and contains a highly readable introduction by S. C. Roberts. It will be of value to anyone with an interest in Samuel Johnson, and the eighteenth-century literary milieu.