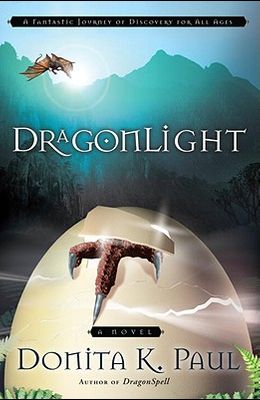 Book #5 in the DragonKeeper Chronicles Series
by
Donita K Paul

The fantastic land of Amara is recovering from years of war inflicted on its citizens by outside forces as well as from the spiritual apathy corroding the Amarans hearts. With Kale and her father serving as dragon keepers for Paladin, the dragon populace has exploded. It s a peaceful, exciting time of rebuilding. And yet, an insidious, unseen evil lurks just beneath the surface of the idyllic countryside. Truth has never been more important, nor so difficult to discern. As Kale and her father are busy hatching, bonding, and releasing the younger generation of dragons as helpers throughout the kingdom, the light wizard has little time to develop her skills. Her husband, Sir Bardon despite physical limitations resulting from his bout with the stakes disease has become a leader, serving on the governing board under Paladin. When Kale and Bardon set aside their daily responsibilities to join meech dragons Regidor and Gilda on a quest to find a hidden meech colony, they encounter sinister forces. Their world is under attack by a secret enemy can they overcome the ominous peril they can t even see? Prepare to experience breathtaking adventure and mind-blowing fantasy as never before in this dazzling, beautifully-crafted conclusion to Donita K. Paul s popular DragonKeeper Chronicles fantasy series.