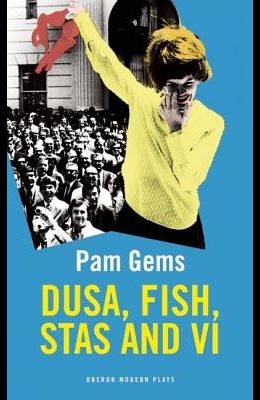 My loves, what are we to do? We don't do as they want any more, and they hate it. What are we to do? Four determinedly 'liberated' - and very different - women ricochet around a tiny shared flat, while trying to pull together the shattered strands of their lives: Dusa is struggling to regain her children from their father, Fish is losing her lover to another woman, Stas is on the game to finance the course she wants to study at university, while Vi steadfastly refuses to eat.... A bitingly sardonic modern classic, widely regarded as an historic icon of early feminism, Dusa, Fish, Stas and Vi was first seen at the Edinburgh Festival Fringe in 1976 under the title Dead Fish . Michael Codron transferred the play to the West End under its new title, where it enjoyed a huge success and established Pam Gems as a major new voice in British theatre. Dusa, Fish, Stas and Vi may be almost 40 years old, but the struggle it depicts continues... There are moments of delirious joy and laughter. - Guardian This] 1976 play by Pam Gems -- a picture of female friendship, laced with politics -- is worth reviving. Gems was one of a new wave of playwrights who tackled women's issues in the Seventies, and she did so accessibly. - London Evening Standard ...the real feminist questions are woven through character and dialogue. This lack of didacticism allows us to truly appreciate Gem's soaring witticisms, Gem's utterly poignant last line: My loves, what are we to do? We won't do as they want anymore, and they hate it. What are we to do? is certainly not a question that has been answered by time. But it's a question, and a production, that deserves attention. - What's Peen Seen Originally written in 1976, Pam Gems' feminist classic Dusa, Fish, Stas and Vi has held up remarkably well. Gems' timelessness lies in her naturalistic style. Though infused with ideology Dusa, Fish, Stas and Vi avoids overtly banging a political drum, instead showing us that the personal is always political. - The Stage The writing is spiky, contrary, funny, militant, quirky, depressing and exhilarating. It throbs with real life, and ends on a provocative cry of pain. - Arts Desk Do we need this play now? In short, yes, we do. Though each character's problem does seem a little contrived and dated at the outset, Gems's treatment of these issues is, in many ways, ahead of its time. - Exeunt