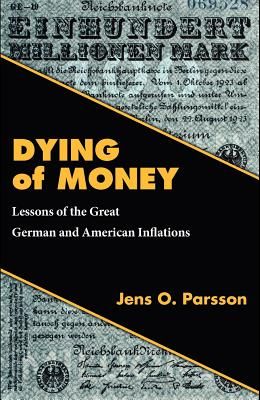 The cover motif is a piece of old German money. It is a Reichsbanknote issued on August 22, 1923 for one hundred million marks. Nine years earlier, that many marks would have been about 5 percent of all the German marks in the world, worth 23 million American dollars. On the day it was issued, it was worth about twenty dollars. Three months later, it was worth only a few thousandths of an American cent. The process by which this occurs is known as inflation. A few years before, in 1920 and 1921, Germany had enjoyed a remarkable prosperity envied by the rest of the world. Prices were steady, business was humming, everyone was working, the stock market was skyrocketing. The Germans were swimming in easy money. Within the year, they were drowning in it. Until it was all over, no one seemed to notice any connection between the earlier false boom and the later inflationary bust. In this book, Jens O. Parsson performs the neat trick of transforming the dry economic subject of inflation into a white-knuckles kind of blood-chiller. He begins with a freewheeling account of the spectacular inflation that all but destroyed Germany in 1923, taking it apart to find out both what made it tick and what made it finally end. He goes on to look at the American inflation that was steadily gaining force after 1962. In terms clear and fascinating enough for any layman, but with technical validity enough for any economist, he applies the lessons gleaned from the German inflation to find that too much about the American inflation was the same, lacking only the inexorable further deterioration that time would bring. The book concludes by charting out all the possible future prognoses for the American inflation, none easy but some much less catastrophic than others. Mr. Parsson brings much new light to bear on this subject. He lays on the line in tough, spare language exactly how and why the American inflation was caused, exactly who was responsible for causing it, exactly who unjustly benefited and who suffered from the inflation, exactly why the government could not permit the inflation to stop or even to cease growing worse, exactly who was going to pay the ultimate price, and exactly what would have to be done to avert the ultimate conclusion. This book packs a wallop. It is not for the timid, and it spares no tender sensibilities. The conclusions it reaches are shocking and are bound to provoke endless dispute. If they proved to approximate even remotely the correct analysis of the American inflation, hardly any American citizen could escape being the prey of inflation and no one could afford not to know where the inflation was taking him. In the economic daily lives of everyone, nothing will be the same after this book as it was before.