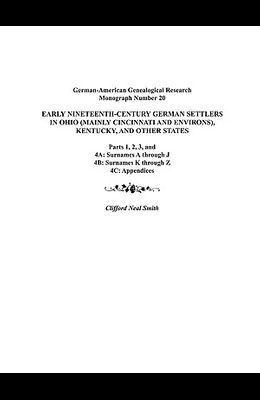 Early Nineteenth-Century German Settlers in Ohio (Mainly Cincinnati and Environs), Kentucky, and Other States. Parts 1, 2, 3, 4a, 4b, and 4C

Germany immigration authority, Clifford Neal Smith spent a number of years ferreting out surrogate passenger information from the periodical literature. In one instance, Mr. Smith transcribed the genealogical contents, published between 1869 and 1877, of Volumes 1 through 9 of Der Deutsche Pioniere, a monthly magazine issued by the Deutsche Pioniereverein (Union of German Pioneers) founded in Cincinnati, Ohio. Mr. Smith provides the following particulars on each German-American pioneer found in that periodical: name, place of origin in Germany, town or county of residence, reference to the original source, and biographical data provided in the original notice. While most of the early entries pertain to Germanic inhabitants of Ohio, later issues of Der Deutsche Pioniere refer to deceased persons living in Kentucky and neighboring states.