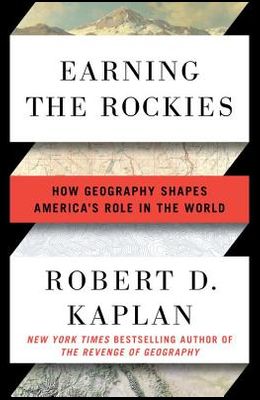 Earning the Rockies: How Geography Shapes America's Role in the World

An incisive portrait of the American landscape that shows how geography continues to determine America's role in the world--from the bestselling author of The Revenge of Geography and Balkan Ghosts As a boy, Robert D. Kaplan listened to his truck-driver father tell evocative stories about traveling across America in his youth, travels in which he learned to understand the country literally from the ground up. There was a specific phrase from Kaplan's childhood that captured this perspective: A westward traveler must earn the Rockies by driving--not flying--across the flat Midwest and Great Plains. In Earning the Rockies, Kaplan undertakes his own cross-country journey to recapture an appreciation of American geography often lost in the jet age. Traveling west, in the same direction as the pioneers, Kaplan traverses a rich and varied landscape that remains the primary source of American power. Along the way, he witnesses both prosperity and decline--increasingly cosmopolitan cities that thrive on globalization, impoverished towns denuded by the loss of manufacturing--and paints a bracingly clear picture of America today. The history of westward expansion is examined here in a new light--as a story not just of genocide and individualism, but also of communalism and a respect for the limits of a water-starved terrain, a frontier experience that bent our national character toward pragmatism. Kaplan shows how the great midcentury works of geography and geopolitics by Bernard DeVoto, Walter Prescott Webb, and Wallace Stegner are more relevant today than ever before. Concluding his journey at Naval Base San Diego, Kaplan looks out across the Pacific Ocean to the next frontier: China, India, and the emerging nations of Asia. And in the final chapter, he provides a gripping description of an anarchic world and explains why America's foreign policy response ought to be rooted in its own geographical situation. In this short, intense meditation on the American landscape, Robert D. Kaplan reminds us of an overlooked source of American strength: the fact that we are a nation, empire, and continent all at once. Earning the Rockies is an urgent reminder of how a nation's geography still foreshadows its future, and how we must reexamine our own landscape in order to confront the challenges that lie before us. Praise for Earning the Rockies There is more insight here into the Age of Trump than in bushels of political-horse-race journalism. . . . Earning the Rockies is a tonic, because it brings fundamentals back into view. -- The New York Times Book Review (Editors' Choice) A sui generis writer . . . America's East Coast establishment has only one Robert Kaplan, someone as fluently knowledgeable about the Balkans, Iraq, Central Asia and West Africa as he is about Ohio and Wyoming. -- Financial Times Kaplan has pursued stories in places as remote as Yemen and Outer Mongolia. In Earning the Rockies , he visits a place almost as remote to many Americans: these United States. . . . The author's point is a good one: America is formed, in part, by a geographic setting that is both sanctuary and watchtower. -- The Wall Street Journal A brilliant reminder of the impact of America's geography on its strategy. . . . Kaplan's latest contribution should be required reading. --Henry A. Kissinger Unflinchingly honest, this refreshing approach shows how ideas from outside Washington, D.C., will balance America's idealism and pragmatism in dealing with a changed world. --Secretary of Defense James Mattis