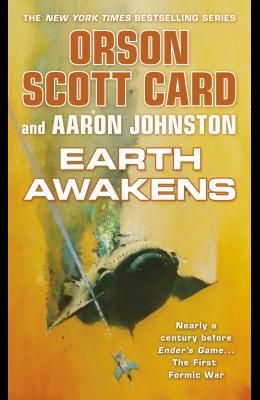 The story of The First Formic War continues in Earth Awakens , nearly 100 years before the events of Orson Scott Card's bestselling novel Ender's Game ... When the alien ship screamed through the solar system, it disrupted communications between the far-flung human mining ships and Earth. So Earth and Luna were unaware that they had been invaded until the ship dropped into Earth orbit, and began landing terraforming crews in China. Politics slowed the response on Earth, and on Luna, corporate power struggles seemed more urgent than distant deaths. But millions of people were dying, and the planet could be lost. It's up to Mazer Rackham's squad in China, who have developed a method to destroy the alien landers one by one; and Lem Jukes and his crew on the Moon, who may have the key to destroying the Formic mother ship in orbit.