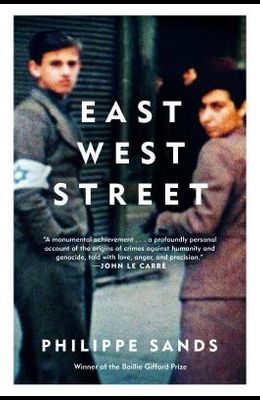 East West Street: On the Origins of genocide and crimes Against Humanity

A profound and profoundly important book--a moving personal detective story, an uncovering of secret pasts, and a book that explores the creation and development of world-changing legal concepts that came about as a result of the unprecedented atrocities of Hitler's Third Reich. East West Street looks at the personal and intellectual evolution of the two men who simultaneously originated the ideas of genocide and crimes against humanity, both of whom, not knowing the other, studied at the same university with the same professors, in a city little known today that was a major cultural center of Europe, the little Paris of Ukraine, a city variously called Lemberg, Lw w, Lvov, or Lviv. It is also a spellbinding family memoir, as the author traces the mysterious story of his grandfather, as he maneuvered through Europe in the face of Nazi atrocities. East West Street is a book that changes the way we look at the world, at our understanding of history and how civilization has tried to cope with mass murder.

Books similiar to East West Street: On the Origins of genocide and crimes Against Humanity

List of All Editions of East West Street: On the Origins of genocide and crimes Against Humanity