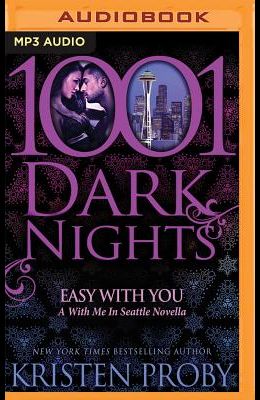 Book #1.5 in the Boudreaux Series
by
Kristen Proby and Jennifer Mack

1001 Dark Nights is a collection of breathtakingly sexy and magically romantic novellas inspired by the exotic tales of The Arabian Nights . In the original, Scheherazade desperately attempts to entertain her husband, the King of Persia, with nightly stories so that he will postpone her execution. In our versions, each of our fabulous authors puts a unique spin on the premise and creates a tale that a new Scheherazade tells long into the dark, dark night. Nothing has ever come easy for Lila Bailey. She's fought for every good thing in her life during every day of her 31 years. Aside from that one night with an impossible-to-deny stranger a year ago, Lila is the epitome of responsible. Steadfast. Strong. She's pulled herself out of the train wreck of her childhood, proud to be a professor at Tulane University and laying down roots in a city she's grown to love. But when some of her female students are viciously murdered, Lila's shaken to the core and unsure of whom she can trust in New Orleans. When the police detective assigned to the murder case comes to investigate, she's even more surprised to find herself staring into the eyes of the man who made her toes curl last year. In an attempt to move on from the tragic loss of his wife, Asher Smith moved his daughter and himself to a new city, ready for a fresh start. A damn fine police lieutenant but new to the New Orleans force, Asher has a lot to prove to his colleagues and himself. With a murderer terrorizing the Tulane University campus, Asher finds himself toe to toe with the one woman who haunts his dreams. His hands, his lips, his body know her as intimately as he's ever known anyone. As he learns her mind and heart as well, Asher wants nothing more than to keep her safe, in his bed, and in his and his daughter's lives for the long haul. But when Lila becomes the target, can Asher save her in time, or will he lose another woman he loves?