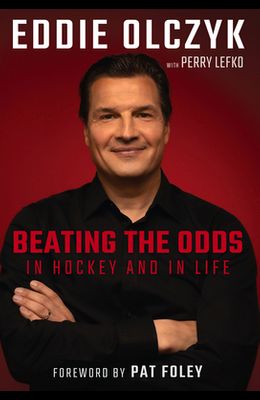 Eddie Olczyk: Beating the Odds in Hockey and in Life

by
Eddie Olczyk and Perry Lefko

Eddie Olczyk had built a life and career most people could only dream of. Growing up in the suburbs of Chicago, he fell in love with the game of hockey during an era when most kids preferred balls to pucks. Against all odds, he played on the 1984 U.S. Olympic hockey team as a 17-year-old, and four months later he was drafted in the first round by his hometown Chicago Blackhawks. During an illustrious 16-year career, he played for and alongside some of the greatest franchises and players in history, winning a Stanley Cup with the unforgettable 1994 New York Rangers. Years later, he coached former teammate Mario Lemieux and Sidney Crosby on the Pittsburgh Penguins before transitioning into the broadcast booth, where he has become one of the most recognizable voices of the sport. He then combined his skills as an analyst with his second passion-- horse racing--and became an integral part of NBC's coverage of thoroughbreds. Away from the spotlight, Olczyk and his wife of three decades raised four adoring children. He was respected and admired by fans, friends, and peers. Life was sweet. Then, at 7:07 pm on August 4, 2017, his entire world turned upside down. In Eddie Olczyk: Beating the Odds in Hockey and in Life, one of the biggest names in American hockey has written an inspiring and entertaining memoir of his life both on and off the ice. From shooting hundreds of tennis balls at a goal in his childhood living room to the ups and downs of his improbable hockey career to rollicking stories from the booth and the backstretch, Olczyk guides readers on his journey toward his ultimate test: a battle against Stage 3 colon cancer. For years, Olczyk's goal was to be the best husband, father, broadcaster, and handicapper he could be. Today he has a new one: to bring as much awareness and support to those fighting cancer as he possibly can. In this emotional but often hilarious autobiography, you'll learn why the people who know Eddie Olczyk best might describe him as tremendously tremendous.