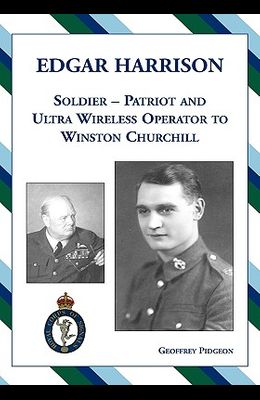 Edgar Harrison, was born in South Wales on St David's Day in 1915. He was a senior colleague of Geoffrey Pidgeon in MI6 (Section VIII) and he had the most extraordinary adventures in World War II. He was in Norway at the time the Germans invaded from where he had to beat a hasty retreat, and was in Brussels during the Blitzkrieg before escaping back to England via Dunkirk. While stationed in Greece the Nazis launched an overwhelming attack. However, he refused to surrender with other Allied troops. Instead, he made his escape via Kalamata in a rowing boat before being rescued by a British destroyer, MS Kandahar. He was landed in Crete where he handled the Ultra traffic during the invasion by the Germans, and later evacuated to Cairo where he spent time recuperating from the wounds sustained in Greece during the retreat to Kalamata. Edgar was then parachuted into Yugoslavia with wireless gear for General Mihailovic and he became involved in close-quarter fighting between the various factions. His security situation became intolerable and he was taken out by submarine. He was then sent to the Ukraine, ostensibly training Russian tank crews in the use of British wireless equipment. After a number of close encounters at the front, he returned to Cairo. There, and in view of Rommel's successful drive into Egypt, he was ordered to set up the agents' wireless station deep in the Libyan desert down at Kufra Oasis, the base of the Long Range Desert Group. From there he was posted to Algiers, then to Sicily and on to Italy. Eventually he returned to MI6 (Section VIII)'s HQ at Whaddon Hall, five miles west of Bletchley Park, before going to France and Germany. During all this he was, on five occasions, the MI6 wireless operator assigned to Winston Churchill at meetings with Allied leaders. After the war Edgar became the Principal Signals Officer of the Foreign Office - not bad for a boy who joined the Royal Corps of Signals as a boy apprentice in 1929 - age 14.