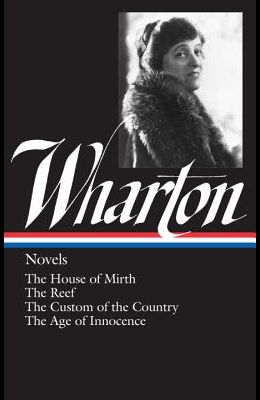 Edith Wharton: Novels (Loa #30): The House of Mirth / The Reef / The Custom of the Country / The Age of Innocence

by
Edith Wharton and R B Lewis
$40.00
Select Format

Edith Wharton's full and glamorous life bridged the literary worlds of two continents and two centuries. Born in 1862 into an exclusive New York society against whose rigid codes of behavior she often rebelled, she lived to regret the passing of that stable if old-fashioned community and to appreciate the sense of personal identity its definitions provided. She became a prolific professional writer, author of more than forty published volumes, including novels, short stories (many of them tales of the supernatural), poetry, war reportage, travel writing, and books on gardens and house decoration. An expatriate in France for three decades before her death in 1937, she included among her many distinguished friends men as various as Henry James, Theodore Roosevelt, Kenneth Clark, and Andre Gide. The four novels in this Library of America volume show Wharton at the height of her powers as a social observer and critic, examining American and European lives with a vision rich in detail, satire, and tragedy. In all of them her strong and autobiographical impulse is disciplined by her writer's craft and her unfailing regard for her audience. The House of Mirth (1905), Wharton's tenth book and her first novel of contemporary life, was an immediate runaway bestseller, with 140,000 copies in print within three months of publication. The story of young Lily Bart and her tragic sojourn among the upper class of turn-of-the-century New York, it touches on the insidious effects of social convention and upon the sexual and financial aggression to which women of independent spirit were exposed. The Reef (1912) is the story of two couples whose marriage plans are upset by the revelation of a past affair between George Darrow (a mature bachelor) and Sophy Vener, who happens to be the fiancee of his future wife's stepson. Henry James called the novel a triumph of method, and it shares the rich nuance of his own The Golden Bowl . The Custom of the Country (1913) is the amatory saga of Undine Spragg of Apex City--beautiful, spoiled, and ambitious--whose charms conquer New York and European society. Vulgar and voracious, she presides over a series of men, representing the old and new aristocracies of both continents, in a comedy drawn unmistakably from life. The Age of Innocence (1920) is set in the New York of Wharton's youth, when the rules and taboos of her social tribe held as-yet unchallenged sway. A quasi-anthropological study of a remembered culture and its curious conventions, it tells the story of the Countess Olenska (formerly Ellen Mingott), refugee from a disastrous European marriage, and Newland Archer, heir to a tradition of respectability and family honor, as they struggle uneasily against their sexual attraction.

Frequently Asked Questions About Edith Wharton: Novels (Loa #30): The House of Mirth / The Reef / The Custom of the Country / The Age of Innocence

Books like Edith Wharton: Novels (Loa #30): The House of Mirth / The Reef / The Custom of the Country / The Age of Innocence

0
|   0  reviews
Did you read Edith Wharton: Novels (Loa #30): The House of Mirth / The Reef / The Custom of the Country / The Age of Innocence? Please provide your feedback and rating to help other readers.
Write Review

List of All Editions of Edith Wharton: Novels (Loa #30): The House of Mirth / The Reef / The Custom of the Country / The Age of Innocence