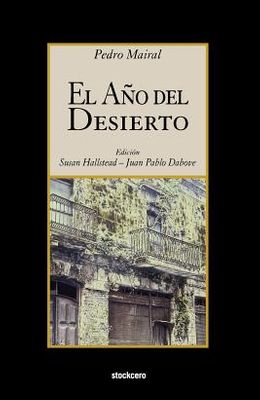 by
Pedro Mairal and Susan Hallstead and Juan Pablo Dabove

El aNo del desierto is the story of a year in the life of Maria Valdes Neylan, narrated by herself, from somewhere in Ireland or England. The novel narrates the (literal) dissolution of a city (Buenos Aires), of a nation (Argentina) and of a life story (that of MarIa). The agent of this dissolution is the Wilderness (la intemperie). But, what is the Wilderness? The novel does not provide any definition or clarification regarding its nature. We do not know if it's a natural or supernatural phenomenon. We do not know if it's a sentient phenomenon, an instrument animated by an evil design or just an impersonal force. Furthermore, nobody witnesses the Wilderness in action. Only its effects are recorded: the gradual (but fast-paced) degradation and disappearance of buildings, streets, of all trace of human work or habitation, and its replacement by a nature (certainly not Mother Nature) out of control. Because of the Wilderness, the city disappears and the Desert reclaims what always belonged to it. This novel by Pedro Mairal (Buenos Aires, 1970) is a brilliant tour de force. On the one hand, it captures the Zeitgeist of post-2001, pre-Kirchner Argentina. But, as happens in Kafka's fictions (or in any work of literature worthy of that name) Mairal takes the allegory well beyond the mere document of the present. In these pages the reader will find a story that is simultaneously familiar and infinitely strange, the sights and sounds of Buenos Aires' everyday life, but also the peculiar taste of a nightmare. The novel is also a sui generis archive of Argentina's historical, cultural and literary experience (its events and characters, as well as its founding tropes and obsessions are all there). Susan Hallstead and Juan Pablo Dabove have exhaustively annotated the novel to allow the reader access to the myriad allusions and meanings embedded in the novel. However, in spite of Mairal's totalizing ambition, El aNo del desierto never ceases to be a highly legible novel, with a capacity to move us with the vicissitudes of MarIa's individual destiny. The introduction (also by Hallstead and Dabove) locates Mairal in his historical and literary context, and gives numerous clues for a complete understanding (and enjoyment) of this novel, one of the best in recent Argentine narrative.