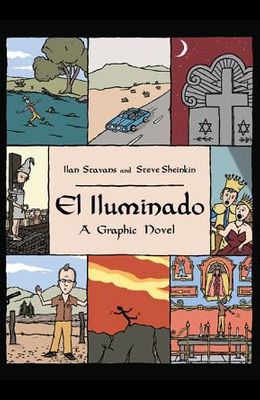 by
Ilan Stavans and Steve Sheinkin

When young Rolando Perez falls to his death from a cliff outside Santa Fe, New Mexico, the mysteries immediately begin to accumulate. Was he pushed or did he jump? What are the documents that Rolando was willing sacrifice himself to protect from his family, the police, and the Catholic Church? And what does a colorful concha pastry have to do with any of this? In the midst of the investigation, Professor Ilan Stavans arrives in Santa Fe to give a lecture about the area's long-buried Jewish history. He's looking forward to relaxing afterwards with an evening of opera, but his presentation on crypto-Jews attracts unexpected attention, and soon Ilan is drawn into a desperate race to find the long-lost documents that might hold the key to Rolando's death. Ilan's detective work leads him to taco joints, desert ranches, soaring cathedrals, and, finally, deep into the region's past, where he encounters another young man: Luis de Carvajal, aka El Iluminado, a sixteenth-century religious dissenter. In a tale of martyrdom that eerily echoes Rolando's, Carvajal fled Spain for colonial Mexico at the height of the Spanish Inquisition, searching for his religious heritage -- a hunt for which he, like Rolando, would pay the ultimate price. In El Iluminado , esteemed literary critic Ilan Stavans and author and illustrator Steve Sheinkin present a secret history of religion in the Americas, showing how thousands of European refugees have left a trail of ghostly footprints -- and troves of mysteries -- across the American Southwest.