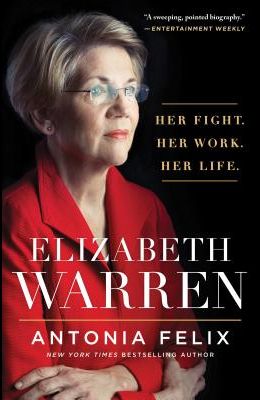 Elizabeth Warren: Her Fight. Her Work. Her Life.

A breakthrough Elizabeth Warren biography by best-selling author Antonia Felix. Elizabeth Warren's rise as one of America's most powerful women is a stirring lesson in persistence. From her fierce support of the middle class to her unapologetic response to political bullies, Warren is known as a passionate yet plain-speaking champion of equity and fairness. In the wake of one fellow senator's effort to silence her in 2016, three words became a rallying cry across the country: Nevertheless, she persisted... In this Elizabeth Warren book, best-selling author Antonia Felix carries readers from Warren's hardscrabble roots in Norman, Oklahoma, to her career as one of the nation's most distinguished legal scholars and experts on the economics of working Americans. Felix reveals how Senator Elizabeth Warren brought her expertise to Washington to become an icon of progressive politics in a deeply divided nation, and weaves together never-before-told stories from those who have journeyed with Warren from Oklahoma to the halls of power. Praise for Elizabeth Warren: Her Fight. Her Work. Her Life. : Many politicians focus on the 'me'. Elizabeth Warren has always been about the 'we'--that sacred American bond of equal justice for all that Dr. King fought for. Felix's biography explains why we need her 'persistent' voice more than ever, now and in the future. -- Congressman John Lewis Felix is an excellent writer, and her book is, at its best, quite interesting. -- NPR Books