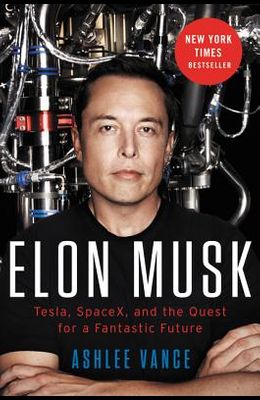 Elon Musk: Tesla, SpaceX, and the Quest for a Fantastic Future

In the spirit of Steve Jobs and Moneyball, Elon Musk is both an illuminating and authorized look at the extraordinary life of one of Silicon Valley's most exciting, unpredictable, and ambitious entrepreneurs--a real-life Tony Stark--and a fascinating exploration of the renewal of American invention and its new makers. Elon Musk spotlights the technology and vision of Elon Musk, the renowned entrepreneur and innovator behind SpaceX, Tesla, and SolarCity, who sold one of his Internet companies, PayPal, for $1.5 billion. Ashlee Vance captures the full spectacle and arc of the genius's life and work, from his tumultuous upbringing in South Africa and flight to the United States to his dramatic technical innovations and entrepreneurial pursuits. Vance uses Musk's story to explore one of the pressing questions of our age: can the nation of inventors and creators who led the modern world for a century still compete in an age of fierce global competition? He argues that Musk--one of the most unusual and striking figures in American business history--is a contemporary, visionary amalgam of legendary inventors and industrialists including Thomas Edison, Henry Ford, Howard Hughes, and Steve Jobs. More than any other entrepreneur today, Musk has dedicated his energies and his own vast fortune to inventing a future that is as rich and far-reaching as the visionaries of the golden age of science-fiction fantasy. Thorough and insightful, Elon Musk brings to life a technology industry that is rapidly and dramatically changing by examining the life of one of its most powerful and influential titans.

From the Back Cover Elon Musk is the most daring entrepreneur of our time There are few industrialists in history who could match Elon Musk's relentless drive and ingenious vision. A modern alloy of Thomas Edison, Henry Ford, Howard Hughes, and Steve Jobs, Musk is the man behind PayPal, Tesla Motors, SpaceX, and SolarCity, each of which has sent shock waves throughout American business and industry. More than any other executive today, Musk has dedicated his energies and his own vast fortune to inventing a future that is as rich and far-reaching as a science fiction fantasy. In this lively, investigative account, veteran technology journalist Ashlee Vance offers an unprecedented look into the remarkable life and times of Silicon Valley's most audacious businessman. Written with exclusive access to Musk, his family, and his friends, the book traces his journey from his difficult upbringing in South Africa to his ascent to the pinnacle of the global business world. Vance spent more than fifty hours in conversation with Musk and interviewed close to three hundred people to tell the tumultuous stories of Musk's world-changing companies and to paint a portrait of a complex man who has renewed American industry and sparked new levels of innovation--all while making plenty of enemies along the way. In 1992, Elon Musk arrived in the United States as a ferociously driven immigrant bent on realizing his wildest dreams. Since then, Musk's roller-coaster life has brought him grave disappointments alongside massive successes. After being forced out of PayPal, fending off a life-threatening case of malaria, and dealing with the death of his infant son, Musk abandoned Silicon Valley for Los Angeles. He spent the next few years baffling his friends by blowing his entire fortune on rocket ships and electric cars. Cut to 2012, however, and Musk had mounted one of the greatest resurrections in business history: Tesla, SpaceX, and SolarCity had enjoyed unparalleled success, and Musk's net worth soared to more than $5 billion. At a time when many American companies are more interested in chasing easy money than in taking bold risks on radical new technology, Musk stands out as the only businessman with enough dynamism and vision to tackle--and even revolutionize--three industries at once. Vance makes the case that Musk's success heralds a return to the original ambition and invention that made America an economic and intellectual powerhouse. Elon Musk is a brilliant, penetrating examination of what Musk's career means for a technology industry undergoing dramatic change and offers a taste of what could be an incredible century ahead.

Books similiar to Elon Musk: Tesla, SpaceX, and the Quest for a Fantastic Future

List of All Editions of Elon Musk: Tesla, SpaceX, and the Quest for a Fantastic Future