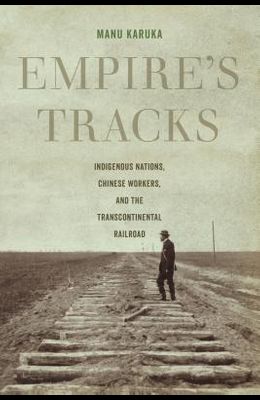 Empire's Tracks boldly reframes the history of the transcontinental railroad from the perspectives of the Cheyenne, Lakota, and Pawnee Native American tribes, and the Chinese migrants who toiled on its path. In this meticulously researched book, Manu Karuka situates the railroad within the violent global histories of colonialism and capitalism. Through an examination of legislative, military, and business records, Karuka deftly explains the imperial foundations of U.S. political economy. Tracing the shared paths of Indigenous and Asian American histories, this multisited interdisciplinary study connects military occupation to exclusionary border policies, a linked chain spanning the heart of U.S. imperialism. This highly original and beautifully wrought book unveils how the transcontinental railroad laid the tracks of the U.S. Empire.

From the front Cover A tour de force. Beautifully written. A dramatic and compelling retelling of the history of the Transcontinental Railroad.--Patrick Anderson, author of Autobiography of a Disease Stunningly original, Empire's Tracks reveals how the construction of infrastructure--the railroad--not only forms the US as a continental and global power, but simultaneously produces race, gender and class. Every student of critical race, indigenous, and feminist studies should read this book.--Joanne Barker, author of Native Acts: Law, Recognition, and Cultural Authenticity A remarkable book. By centering histories of Lakota, Chinese, Pawnee, and Cheyenne peoples, this study displaces the univocal authority of railroad monopolies and demystifies the national history of westward expansion as a project of continental imperialism.--Lisa Lowe, author of The Intimacies of Four Continents A brilliant must read for anyone who seeks to understand the United States.--Roxanne Dunbar-Ortiz, author of An Indigenous Peoples' History of the United States Empire's Tracks demands that we study racial capitalism and settler colonialism together to understand and critique the racial and colonial order known as the United States of America. It is an impassioned and imaginative work that deserves the widest audience possible.--Moon-Ho Jung, author of Coolies and Cane: Race, Labor, and Sugar in the Age of Emancipation With clarity and purpose, this intersectional and theoretically sophisticated examination lays the tracks for future scholarship across disciplinary and inter-disciplinary fields concerned with understanding colonialism, gender and race.--Mishuana Goeman, author of Mark My Words: Native Women (Re)mapping Our Nations Powerfully transformative. This book is more than historiography--it is a call to end conquest as the urgent work of all liberation struggles.--Jodi A. Byrd, author of Transit of Empire: Indigenous Critiques of Colonialism