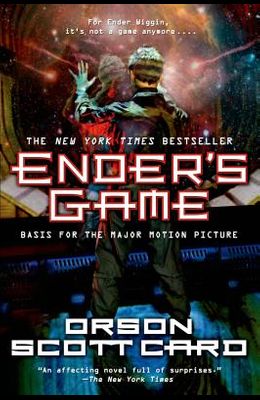 Book #1 in the Ender's Saga Series
by
Orson Scott Card

The worldwide bestseller, Ender's Game by Orson Scott Card comes to the screen at last in a major motion picture event in November 2013. Starring Hugo's Asa Butterfield, Harrison Ford, and Ben Kingsley, the movie is sure to inspire a new audience of fans to read the book that started it all. Once again, Earth is under attack. An alien species is poised for a final assault. The survival of humanity depends on a military genius who can defeat the aliens. But who? Ender Wiggin. Brilliant. Ruthless. Cunning. A tactical and strategic master. And a child. Recruited for military training by the world government, Ender's childhood ends the moment he enters his new home: Battle School. Among the elite recruits Ender proves himself to be a genius among geniuses. He excels in simulated war games. But is the pressure and loneliness taking its toll on Ender? Simulations are one thing. How will Ender perform in real combat conditions? After all, Battle School is just a game. Isn't it?