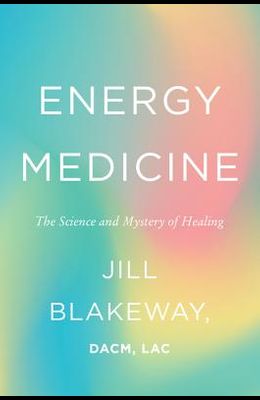 Energy Medicine: The Science and Mystery of Healing

The first comprehensive look at the groundbreaking field of energy medicine and how it can be used to diagnose and treat illness, from one of the world's foremost practitioners of Traditional Chinese Medicine. Today, more of us than ever are discovering the curative powers of energy medicine. Scientific studies continue to confirm its validity, and medical doctors are regularly prescribing treatments such as acupuncture to their patients. But even for those of us who have benefitted from such treatments, the question remains: what exactly is energy medicine, and how does it work? Acupuncturist and Traditional Chinese Medicine (TCM) scholar Jill Blakeway has been treating patients for more than twenty-five years. For Jill, the term energy medicine refers to the wide range of healing modalities used to diagnose and treat illness by manipulating the energy--the vital life force referred to as qi in TCM--that pulses through the cells of our bodies. But even this seasoned practitioner admits she doesn't truly understand how some of her patients are healed under her care, and retains a healthy skepticism about her own abilities as well those of her peers. In Energy Medicine , Jill invites us on her global journey to better understand, apply, and explain this powerful healing force. Moving from her own clinic to the halls of acadamia, she talks to top healers, researchers, and practitioners--from the Stanford and Princeton professors researching the physics behind energy medicine and healing; to a Chinese Qi Gong master who manifests healing herbs directly from her palm; to a team of skeptical scientists who use hands on healing to repeatedly cure mammary cancer in mice. She also tells the story of how she discovered energy medicine and became one of the most sought-after healers in the world. Lively, entertaining, and informative, told in Jill's funny, relatable, and wholly grounded voice, Energy Medicine bridges the gap between science and spirituality and offers a persuasive, evidence-based case that advances this ancient healing practice.

From the front Cover A rigorous and fascinating look at the role of energy in our lives-and how we can harness its power to heal ourselves The field of energy medicine has undergone explosive growth in recent years. Studies out of top academic and medical institutions are validating its curative powers, consumers are increasingly curious about alternative healing modalities, and medical doctors are regularly prescribing energy treatments, such as acupuncture, to their patients. But despite this rise in both popularity and acceptance, the field remains shrouded in mystery. What exactly is energy medicine, and how does it work? Acupuncturist and traditional Chinese medicine scholar Jill Blakeway has been treating patients with energy medicine--often in conjunction with conventional Western medicine--for more than twenty-five years. By her definition, energy medicine refers to the wide range of healing methods used to diagnose and treat illness by manipulating the energy that pulses through every cell of the body. But even Jill admits that there is an element to her practice that lies just beyond comprehension. As such, while she is a sought-after and gifted healer, she has always remained just a tiny bit skeptical of her own abilities, not to mention those of others in her field. In Energy Medicine , Blakeway invites readers along on her journey to better understand her craft. With access to scientists at leading universities as well as proponents of energy medicine from across the discipline, Jill offers an exclusive, one-of-a-kind exploration and analysis of this powerful practice. In her travels from the halls of academia to healing centers around the world, Blakeway introduces readers to a variety of practitioners--including the Princeton professors researching the physics of energy medicine, a team of skeptical scientists who use hands-on healing to cure mammary cancer in mice, and a Japanese mystic whose explorations at the boundaries of self and consciousness have rendered him impervious to pain--all of whom are attempting to better understand how we can harness energy to heal what ails us. Lively, entertaining, and informative, Energy Medicine bridges the gap between science and spirituality and offers readers an evidence-based case for the efficacy of this ancient healing practice. --Mark Hyman, MD, bestselling author of Eat Fat, Get Thin