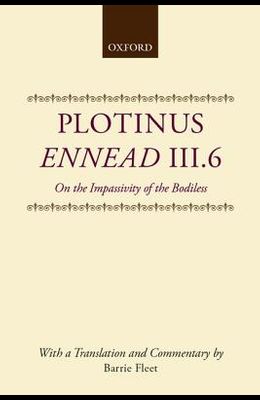 Ennead III.6: On the Impassivity of the Bodiless

by
Plotinus and Barrie Fleet

Plotinus (c. AD 205-270) can be regarded as the greatest Greek philosopher of late Antiquity, and as the father of Neoplatonism. His Enneads (the nines) are now recognized as seminal works in the development of Western thought. This book is the only detailed scholarly commentary available on this part of Plotinus's work, and should be invaluable to all scholars interested in ancient philosophy and early Christian theology. All Greek in the commentary is translated.

From the Back Cover With the growth of interest in later Greek philosophy, the importance of Plotinus (AD 205-270) as a seminal influence on later thinkers, both pagan and Christian, is being increasingly recognized. The Enneads have been readily available for some time, both in Greek and in English translation, and there is no shortage of scholarly writing on the Enneads in general, and on particular aspects of Plotinus' thought. However, apart from Michael Atkinson's translation and commentary on Ennead V.1 (Clarendon Press, 1985), there has been no major commentary in English on any single treatise. Plotinus' Greek is notoriously obscure, and mere translation often sheds little light. Barrie Fleet's translation and commentary on Ennead III.6 elucidates the text of a major treatise in which Plotinus uses the concept of impassivity to shed light on three questions of importance to Platonists: the nature of change in the human soul; its analogue in the Sensible World; and the nature of Matter. Dr Fleet shows how texts of Plato and Aristotle, and Hellenistic commentaries on them, were central to the seminars held in Rome under the leadership of Plotinus. This treatise is the outcome of one such seminar. All Greek quotations in the commentary are translated into English, and all Greek terms are either translated or transliterated, making this edition fully accessible to readers with or without Greek.