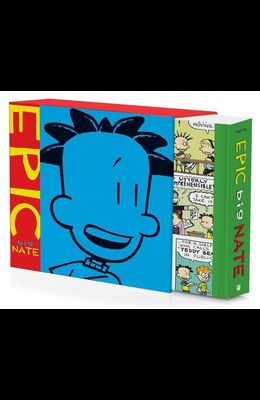 Happy Birthday to the New York Times Best Seller, Big Nate Celebrate twenty-five years of the Big Nate cartoon strip with this jam-packed compendium of everything you've ever wanted to know about the character and Lincoln Peirce, the creator behind him. If there's one word that Big Nate would use to describe himself, it would be E-P-I-C And so is this slipcased, jam-packed book full of cartoons and memorabilia celebrating 25 years of Lincoln Peirce's long-running comic strip: Epic Big Nate. Hundreds of cartoons, selected by Peirce and presented with his witty and informative commentary, trace the evolution of the Big Nate comic strip and its colorful cast of characters. Also included is an exclusive Q&A featuring Peirce and Diary of a Wimpy Kid author Jeff Kinney, detailing the friendship and mutual admiration that contributed to each cartoonist's success. Featuring highlights from 1991 to 2015, Epic Big Nate is a must-have for Big Nate fans of all ages