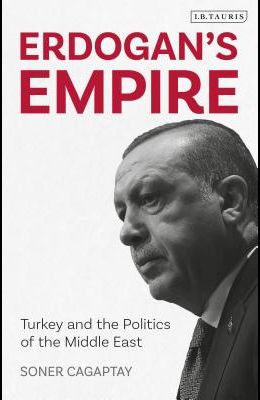 Erdogan's Empire: Turkey and the Politics of the Middle East

Gradually since 2002, Turkey's autocratic leader Recep Tayyip Erdogan has sought to make Turkey a great power --in the tradition of past Turkish leaders from the late Ottoman sultans to Ataturk, the founder of modern Turkey. Here the leading authority Soner Cagaptay, author of The New Sultan - the first biography of President Erdogan - provides a masterful overview of the power politics in the Middle East and Turkey's place in it. Erdogan has picked an unorthodox model in the context of recent Turkish history, attempting to cast his country as a stand-alone Middle Eastern power. In doing so Turkey has broken ranks with its traditional Western allies, including the United States and has embraced an Ottoman Empire-style imperial foreign policy. Dubbed strategic depth, this policy has aimed to restore Turkey's reach into the the Arabian Middle East and the Balkans. Today, in addition to a domestic crackdown on dissent and journalistic freedoms, driven by Erdogan's style of governance, Turkey faces a hostile world. Ankara has nearly no friends left in the Middle East, and it faces a threat from resurgent historic adversaries: Russia and Iran. Furthermore, Turkey cannot rely on the unconditional support of its traditional Western allies. Can Erdogan deliver Turkey back to safety? What are the risks that lie ahead for him, and his country? How can Turkey truly become a great power, fulfilling a dream shared by many Turks, the sultans, Ataturk, and Erdogan himself?