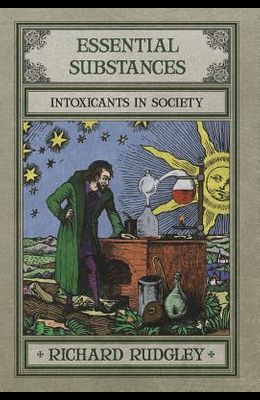 Richard Rudgley's first book, Essential Substances, was the winner of the British Museum Prometheus Award and hailed as a masterpiece by the Director of Harvard Botanical Museum, the world's leading authority on hallucinogenic plants. It is still one of the few books to have explored the role of drugs in the religious, political, economic and sexual life of our species from prehistory to the present day, covering a range of cultures as diverse as the Amazonian Indians, the Scythians of the ancient world and the witches of Medieval Europe alongside inner city crack and drugs in the counterculture. It is a magical tour of the fantastic and often bizarre world of intoxicants peopled by tribesmen and mystics, statesmen and writers, housewives and yuppies. Rudgley cogently shows how the significance of these substances extends beyond simple pleasure to the economic, political, and sexual life of a community. In the process, he challenges our assumptions that deem certain intoxicants socially and legally acceptable, while others remain taboo. Essential Substances remains a timely, much-needed reconsideration of the roles intoxicants play in our lives and society. Added for this edition is a new appendix, 'A Psychoactive Bestiary'. 'A splendid contribution to the new wave of scholarship that is forcing a different approach to our ages-old fascination with hallucinogenic plants and altered states. Richard Rudgley is to be congratulated' - Terence McKenna, author of Food of the Gods and True Hallucinations 'Should be required reading for all legislators who think disliked substances can be made to vanish by means of criminal sanctions' - Andrew Weil MD, author of The Natural Mind 'A unique contribution to the literature on intoxicants...destined to have a tremendous effect on how future writings treat the history and contemporary use of drugs. In short, the book is truly a masterpiece' - Richard Evans Schultes, Director Emeritus of the Harvard Botanical Museum 'This book will help to illuminate our own arbitrary and confused attitudes' - Hanif Kureishi Richard Rudgley is a critically acclaimed author and TV presenter whose books have been translated into twelve languages. He was born in Hampshire, England in 1961. After receiving a first class degree in Social Anthropology and Religious Studies at the University of London, he continued his studies in ethnology, museum ethnography and prehistory at the University of Oxford. In 1991 he became the first winner of the British Museum Prometheus Award which resulted in the publication of his first book, Essential Substances: A Cultural History of Intoxicants. His equally well-received book, The Encyclopaedia of Psychoactive Substances, was published in 1998. In the same year his book Lost Civilisations of the Stone Age presented overwhelming evidence that the historical civilisations owed a much greater cultural debt to their prehistoric ancestors than is generally accepted. He has written and presented several documentaries that have aired on Channel 4 in the United Kingdom and on various channels internationally, including Secrets of the Stone Age, Barbarians and Pagans. He also wrote books to accompany the former two. In 2006, he published Pagan Resurrection: A Force for Evil or the Future of Western Spirituality? which describes the various ways the archetypes of Northern European mythology have re-emerged in the Western psyche. He is a Fellow of the Royal Geographical Society and a member of the Asatru Folk Assembly. Arktos has republished his books Wildest Dreams: An Anthology of Drug-Related Literature, which collects writings both ancient and modern describing the drug experience; and Barbarians, which is about the Dark Ages.

0
|   0  reviews
Did you read Essential Substances? Please provide your feedback and rating to help other readers.
Write Review