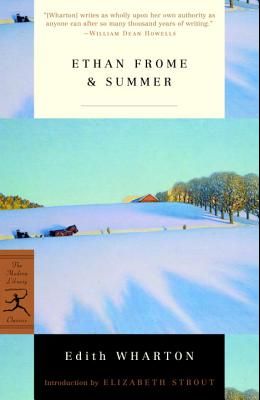 A pair of masterly short novels, featuring an introduction by Elizabeth Strout, the Pulitzer Prize-winning author of Anything Is Possible and My Name Is Lucy Barton Thought Edith Wharton is best known for her cutting contemplation of fashionable New York, Ethan Frome and Summer are set in small New England towns, far from Manhattan's beau monde. Together in one volume, these thematically linked short novels display Wharton's characteristic criticism of society's hypocrisy, and her daring exploration of the destructive consequences of sexual appetite. From the wintry setting of Ethan Frome , where a man hounded by community standards is destroyed by the very thing that might bring him happiness, to the florid town of Summer , where a young woman's first romance projects her into a dizzying rite of passage, Wharton captures beautifully the urges and failures of human nature. Praise for Edith Wharton and Ethan Frome Ethan Frome is considered] Mrs. Wharton's masterpiece . . . The secret of its greatness is the stark human drama of it; the social crudity and human delicacy intermingled; the defiant, over-riding passion, and the long-drawn-out logic of the paid penalty. It has no contexts, no mitigations; it is plain, raw, first-hand human stuff. -- The New York Times Ethan Frome has] become part of the American mythology. . . . Wharton's astonishing authority here is to render such pain with purity and economy . . . Truly it is a northern romance, akin even to Wuthering Heights. --Harold Bloom Traditionally, Henry James has always been placed slightly higher up the slope of Parnassus than Edith Wharton. But now that the prejudice against the female writer is on the wane, they look to be exactly what they are: giants, equals, the tutelary and benign gods of our American literature. --Gore Vidal

From the front Cover This edition presents Wharton's two most controversial stories, which she considered inseperable, in one volume for the first time. Set in frigid New England, both deal with sexual awakening and appetite and their devastating consequences. This text includes newly commissioned notes.