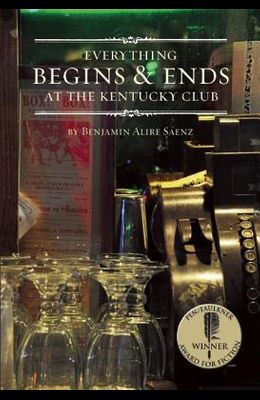 Everything Begins & Ends at the Kentucky Club

Winner of the 2013 PEN/Faulkner Award for Fiction Benjamin Alire Saenz's stories reveal how all borders--real, imagined, sexual, human, the line between dark and light, addict and straight--entangle those who live on either side. Take, for instance, the Kentucky Club on Avenida Juarez two blocks south of the Rio Grande. It's a touchstone for each of Saenz's stories. His characters walk by, they might go in for a drink or to score, or they might just stay there for a while and let their story be told. Saenz knows that the Kentucky Club, like special watering holes in all cities, is the contrary to borders. It welcomes Spanish and English, Mexicans and gringos, poor and rich, gay and straight, drug addicts and drunks, laughter and sadness, and even despair. It's a place of rich history and good drinks and cold beer and a long polished mahogany bar. Some days it smells like piss. I'm going home to the other side. That's a strange statement, but you hear it all the time at the Kentucky Club. Benjamin Alire Saenz is a highly regarded writer of fiction, poetry, and children's literature. Like these stories, his writing crosses borders and lands in our collective psyche. Poets & Writers Magazine named him one of the fifty most inspiring writers in the world. He's been a finalist for the Los Angeles Times Book Prize and PEN Center's prestigious award for young adult fiction. Saenz is the chair of the creative writing department of University of Texas at El Paso. Awards: PEN/Faulkner Award for Fiction Lambda Literary Award Southwest Book Award

Books similiar to Everything Begins & Ends at the Kentucky Club