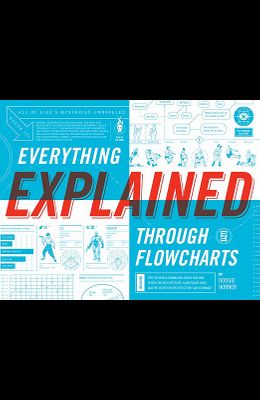 Everything Explained Through Flowcharts: All of Life's Mysteries Unraveled, Including Tips for World Domination, Which Religion Offers the Best Afterl

This guide maps out the answers to complicated conundrums, with subject matter ranging from profound philosophical queries to lighthearted pop culture and everything in between.

From the Back Cover Everything Explained Through Flowcharts is packed with meticulously designed charts that trace the labyrinthine connections that order the universe, illuminate life's great mysteries, and cause eye strain in senior citizens. Swiss scientists at the prestigious University of Helsinki have said that Everything Explained Through Flowcharts is the closest thing there is to a working unified field theory, and have gone on to claim that they aren't Swiss, aren't scientists, and aren't sure whether or not Helsinki is in Switzerland. And yet the Swiss consulate has not denied that this book contains more than two hundred illustrations, forty mammoth charts, and innumerable supporting graphs and essays, including: An illustrated matrix of WWF Finishing Moves Heavy metal band names taxonomy The noble art of zeppelin warfare demystified How to win any argument Tragedy to comedy conversion chart for comedians A creepy drawing of a baby skeleton How to tell if you're an evil twin