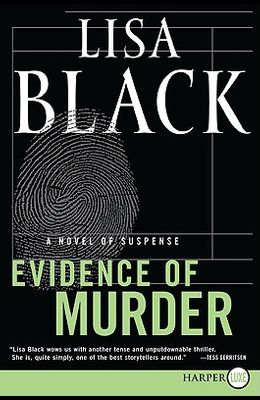 Evidence of Murder: A Novel of Suspense

Book #2 in the Theresa MacLean Series
by
Lisa Black

Lisa Black, a former forensic scientist whose electrifying thrillers bear the indelible mark of authenticity, brings us Evidence of Murder --a riveting tale of crime and detection sure to enthrall fans of Patricia Cornwell and TV's C.S.I. New York Times bestselling author Tess Gerritsen calls Black's new novel, another tense and unputdownable thriller. She is, quite simply, one of the best storytellers around. Evidence of Murder delivers that and more--as returning heroine, forensic investigator Theresa MacLean, looks into the death of a young mother that may have terrifying consequences for an innocent child.

From the Back Cover Forensic investigator Theresa MacLean takes on the worst kind of murder case--one without clues--in this second novel in a hot new series from Lisa Black Eight months ago, forensic investigator Theresa MacLean lost her fiancé in a bank robbery gone wrong, and she's had trouble concentrating on her work ever since. But now a particularly difficult case may just be what she needs to regain her focus by demanding all her skill, intelligence, and attention. Jillian Perry has been found dead in the woods, leaving behind a husband of three weeks and a young daughter. The police can't determine how she died--her body shows no visible marks, and the autopsy reveals nothing suspicious--and the leading theory is that she purposely wandered into the forest and succumbed to the freezing weather. But something doesn't feel right to Theresa, and she can't let it go. To complicate matters, a former boyfriend of Jillian's unexpectedly petitions for custody of the daughter. Obsessed with Jillian, he also suspects foul play in Jillian's death, and now he and Theresa believe Jillian's daughter may be in danger of meeting a similar fate. With a child's life at stake, Theresa must search for evidence of murder--evidence that doesn't seem to exist--before it's too late.