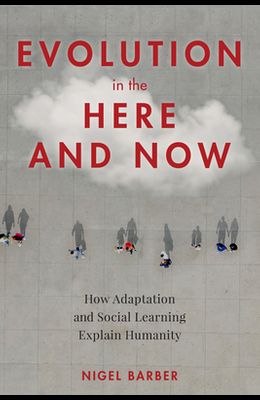 Evolution in the Here and Now: How Adaptation and Social Learning Explain Humanity

This book argues that the two most influential theories on modern human behavior, cultural determinism and evolutionary psychology, are quite inadequate. Cultural deterministic theories deny personal experience and too often fall prey to anthropocentric bias. Most evolutionary psychologists argue that humans are shaped to fit our ancestral past, effectively freezing us in time. Evolution in the Here and Now looks to new factors like social learning and adaptation to explain the idiosyncrasies of human behavior in a more complete and nuanced way. Evolutionary psychologist Nigel Barber shows that human behavior is uniquely crafted by the surrounding environment in underappreciated and surprising ways. For example, commerce and agriculture can be interpreted as adaptive alternatives to hunting and gathering. Irrigated farming was a response to land scarcity, which ultimately permitted the rise of early cities. This cross-discliplinary approach unites the missing ingredients that have for so long impeded our understanding of our own species and its variation across cultures. Evolution in the Here and Now is a bold step forward in the evolutionary understanding of human behavior that marries our biology with our history in ways that have never been attempted before.