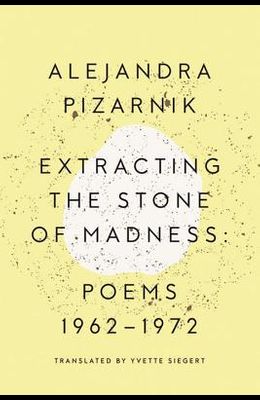 by
Alejandra Pizarnik and Yvette Siegert

Revered by the likes of Octavio Paz and Roberto Bolano, Alejandra Pizarnik is still a hidden treasure in the U.S. Extracting the Stone of Madness: Poems 1962 1972 comprises all of her middle to late work, as well as a selection of posthumously published verse. Obsessed with themes of solitude, childhood, madness and death, Pizarnik explored the shifting valences of the self and the border between speech and silence. In her own words, she was drawn to the suffering of Baudelaire, the suicide of Nerval, the premature silence of Rimbaud, the mysterious and fleeting presence of Lautreamont, as well as to the unparalleled intensity of Artaud s physical and moral suffering.