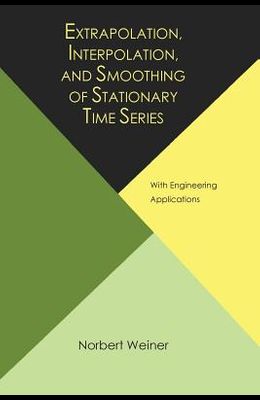 2013 Reprint of 1949 Edition. Full facsimile of the original edition, not reproduced with Optical Recognition Software. This is the second book by Norbert Wiener on time series and communication engineering. While the first one, Cybernetics, treated the subject from a general standpoint and was more philosophical than mathematical, the present volume is more technical than theoretical, and forms a kind of companion piece to the first. It is intended as a tool for engineers working in the field of electrical communication and related subjects. The book consists of an introduction, five chapters, and three appendices. After explaining the general outline of the problem in the introduction, the author gives in Chapter I a review of generalized harmonic analysis which is necessary for the understanding of the following chapters. Chapters II and III are devoted to the problems of prediction and filtering respectively. In Chapter IV there is given a brief account of the theory of multiple prediction, that is, the theory of prediction when we deal with more than one time series at the same time. Finally, in Chapter V there is given a short discussion on the application of similar methods to a problem of approximate differentiation.