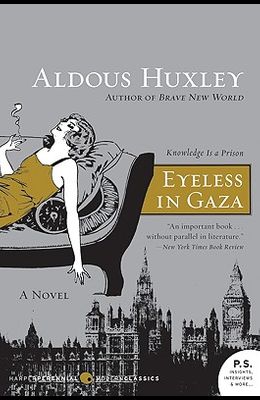 One of Brave New World author Aldous Huxley's finest and most personal novels, now back in print in a Harper Perennial Modern Classics edition, Eyeless in Gaza is the story of one man's quest to find a meaningful life, which leads him from blind hedonism to political revolution to spiritual enlightenment.

From the Back Cover Written at the height of his powers immediately after Brave New World , Aldous Huxley's highly acclaimed Eyeless in Gaza is his most personal novel. Huxley's bold, nontraditional narrative tells the loosely autobiographical story of Anthony Beavis, a cynical libertine Oxford graduate who comes of age in the vacuum left by World War I. Unfulfilled by his life, loves, and adventures, Anthony is persuaded by a charismatic friend to become a Marxist and take up arms with Mexican revolutionaries. But when their disastrous embrace of violence nearly kills them, Anthony is left shattered--and is forced to find an alternative to the moral disillusionment of the modern world.
From the front Cover Eyeless in Gaza offers a counterpoint to the biting cynicism of Huxley's earlier satirical novels, and is considered by many to be his definitive work of fiction.