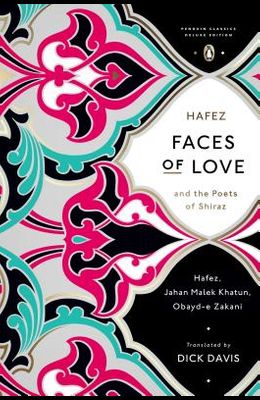 Faces of Love: Hafez and the Poets of Shiraz (Penguin Classics Deluxe Edition)

Acclaimed translator Dick Davis breathes new life into the timeless works of three masters of 14th-century Persian literature Together, Hafez, a giant of world literature; Jahan Malek Khatun, an eloquent princess; and Obayd-e Zakani, a dissolute satirist, represent one of the most remarkable literary flowerings of any era. All three lived in the famed city of Shiraz, a provincial capital of south-central Iran, and all three drew support from arts-loving rulers during a time better known for its violence than its creative brilliance. Here Dick Davis, an award-winning poet widely considered our finest translator of Persian poetry ( The Times Literary Supplement ), presents a diverse selection of some of the best poems by these world-renowned authors and shows us the spiritual and secular aspects of love, in varieties embracing every aspect of the human heart. Davis is] widely acknowledged as the leading translator of Persian literature in our time... Faces of Love has made the Persian originals into real and moving English poems. --Michael Dirda, The Washington Post For more than sixty-five years, Penguin has been the leading publisher of classic literature in the English-speaking world. With more than 1,500 titles, Penguin Classics represents a global bookshelf of the best works throughout history and across genres and disciplines. Readers trust the series to provide authoritative texts enhanced by introductions and notes by distinguished scholars and contemporary authors, as well as up-to-date translations by award-winning translators.