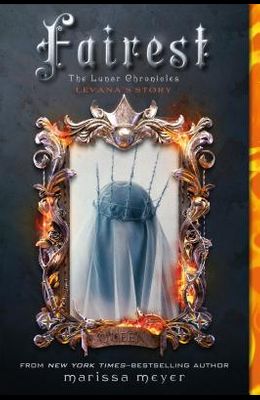 Book #3.5 in the The Lunar Chronicles Series
by
Marissa Meyer

A standalone prequel to the #1 New York Times- and USA Today- Bestselling Lunar Chronicles series by Marissa Meyer Find out what made the evil space queen from the beloved series so wicked. An interesting mash up of fairy tales and science fiction . . . a cross between Cinderella, Terminator , and Star Wars. -- Entertainment Weekly on the Lunar Chronicles Prince Charming among the cyborgs. -- The Wall Street Journal on the Lunar Chronicles Mirror, mirror, on the wall. Who is the Fairest of them all? Pure evil has a name, hides behind a mask of deceit, and uses her glamour to gain power. But who is Queen Levana? Long before she crossed paths with Cinder, Scarlet, and Cress in The Lunar Chronicles, Levana lived a very different story--a story that has never been told . . . until now. New York Times -bestselling author Marissa Meyer reveals the story behind her fascinating villain in Fairest , an unforgettable tale about love and war, deceit and death. This extraordinary book includes a special full-color image of Levana's castle and an excerpt from Winter , the exciting conclusion to The Lunar Chronicles. Praise for the Lunar Chronicles : #1 New York Times -Bestselling Series USA Today Bestseller Publishers Weekly Bestseller Terrific. -- Los Angeles Times Marissa Meyer rocks the fractured fairytalegenre. -- The Seattle Times Epic awesome. -- Bustle A binge-reading treat. --MTV Takes the classic to a whole new level. --NPR Meyer is putting a spin on the evil queen from Snow White fame to show how Levana became the kind of woman who would rule the moon colony of Luna and want to take over Earth, too. -- USA Today on Fairest An unrelentingly gripping read . . . Channeling her inner George R. R. Martin, Marissa Meyer weaves the grimmest of fairy tales in Fairest . --Hypable on Fairest Will thrill fans and entice new readers. -- School Library Journal on Fairest

The Lunar Chronicles Series In Order - By Marissa Meyer