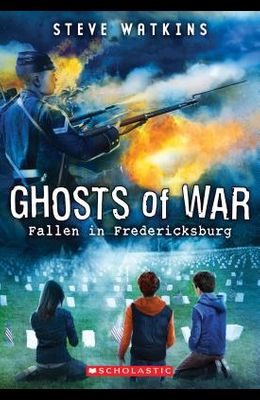 Fallen in Fredericksburg (Ghosts of War #4)

Book #4 in the Ghosts of War Series
by
Steve Watkins

After three ghosts, it looks like things might be going back to normal for Anderson and his friends Greg and Julie. It's been a while since any ghosts have shown up, and the most annoying things lately are the loud barking dogs at the Dogs and Suds pet-grooming shop next door to the Kitchen Sink. They've been barking nonstop for days, and it's making band practice impossible. But maybe the dogs know something the friends don't . . . Because suddenly a ghost does appear From what Anderson can tell, it looks like the ghost is a teenage Union soldier from the Civil War, and he looks terrifying. But this ghost is different from the others: He's demanding to know what happened to his brother, who was also enlisted in the Union army. It's a mystery that's over a hundred and fifty years old, and there are very few clues. What will happen to Anderson, Greg, and Julie if they can't solve this one in time?

Ghosts of War Series In Order - By Steve Watkins