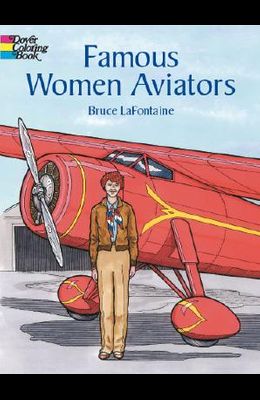 The remarkable women in this collection of 44 carefully researched and meticulously rendered illustrations have been widely honored for their accomplishments in the field of aviation. After entering a profession almost completely dominated by men, they went on to play significant roles in aviation history. Each ready-to-color drawing depicts at least one woman aviator along with a picture of the aircraft they piloted. Among the outstanding figures depicted are Eileen Collins, the first female space shuttle commander; American astronaut Shannon Lucid, assigned to the Russian MIR space station; Sally Ride, the first American woman in space; Russian Valentina Tereshkova, the first woman in space; Russian female fighter pilots of World War II; Amelia Earhart, who made a solo flight across the Atlantic in 1932; Harriet Quimby, the first licensed woman pilot in the United States; and Blanche Stuart Scott, the first woman to unofficially pilot a place. Among other aviatrix spotlighted here are: - Helene Dutrieu, Europe's first well-known female flyer, who piloted her first plane in 1909 - Louise Thaden and the Ninety-Nines, founding members of an organization promoting women in aviation (1929) - Bessie Coleman, the first African-American of either gender to earn an international pilot's license - Jackie Cochran, who became the first woman to break the sound barrier (c. 700 mph) in 1953 Captions provide historical and biographical information in an entertaining and educational coloring book that will delight feminists, aviation enthusiasts, and colorists of all ages.