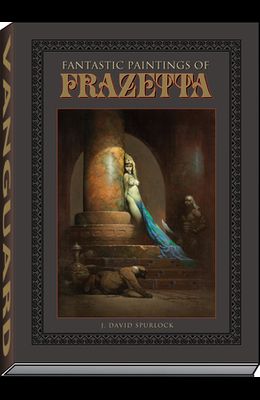 Discover, or return to, the world's greatest heroic fantasy artist, Frank Frazetta in this landmark art collection entitled, Fantastic Paintings of Frazetta . The New York Times said, Frazetta helped define fantasy heroes like Conan, Tarzan and John Carter of Mars with signature images of strikingly fierce, hard-bodied heroes and bosomy, callipygian damsels Frazetta took the sex and violence of the pulp fiction of his youth and added even more action, fantasy and potency, but rendered with a panache seldom seen outside of major works of Fine Art. Despite his fantastic subject matter, the quality of Frazetta's work has not only drawn comparisons to the most brilliant of illustrators, Maxfield Parrish, Frederic Remington, Norman Rockwell, N.C. Wyeth but, even to the most brilliant of fine artists including Rembrandt and Michelangelo and, major Frazetta works sell for millions of dollars, breaking numerous records. This innovator's work has not only inspired generations of artists, but also movies and directors including the Conan films, John Carter of Mars, the sensationally successful Lord of the Rings trilogy, Robert Rodriguez' films including From Dusk Till Dawn, Ralph Bakshi films, the epic, award-winning Game of Thrones series, Tim Burton's Sleepy Hollow, Disney's animated Tarzan films, Francis Ford Coppola's Apocalypse Now and George Lucas' Star Wars series. The Forbes magazine article Schwarzenegger's Sargent led with the line, Which artist helped make Arnold governor? Frank Frazetta, the Rembrandt of barbarians. J. David Spurlock started crafting this book by reviving the original million-selling 1970s mass market art book, Fantastic Art of Frank Frazetta . But, he expanded and revised to include twice as many images and, presents them at a much larger coffee-table book size of 10.5 x 14.625 The collection is brimming with both classic and previously unpublished works of the subjects Frazetta is best remembered for including barbarians, beasts, and buxom beauties. Game of Thrones creator George R. R. Martin said, Though he bears only a passing resemblance to the Cimmerian as Robert E. Howard described him, Frazetta's covers of the Conan paperback collections became the definitive picture of the character... still is. Schwarzenegger said, I have not been intimidated that often in my life. But when I looked at Frazetta's paintings, I tell you, it was intimidating. Game of Thrones, Conan and Aquaman film star Jason Momoa said, I am a huge Frank Frazetta fan. Both of my parents are painters, so I'd known Frazetta's paintings, that's what I wanted to bring to life. See the revolutionary art that helped inspire Schwarzenegger, Momoa, the Lord of the Rings films and Game of Thrones: FRAZETTA

List of All Editions of Fantastic Paintings of Frazetta