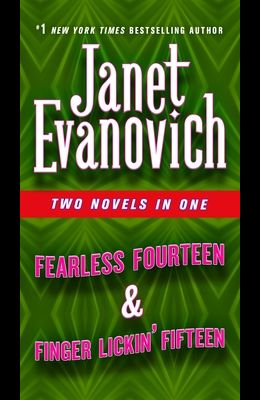 Two of the blockbuster bestselling Stephanie Plum novels from Janet Evanovich in one In Fearless Fourteen : YOU'RE INVITED WHO: America's Favorite Bounty Hunter, Stephanie Plum, along with her sidekicks, Connie, Lula, and Grandma Mazur. Not to mention vice captain Joe Morelli, Super Bounty Hunter, Ranger, and Bob the Dog. WHAT: The next outrageous Stephanie Plum adventure. WHEN: June 18, 2008 WHERE: Trenton, New Jersey and the surrounding environs (the Jersey shore, Atlantic City, the Turnpike, the Pine Barrens) WHY: For non-stop action, comic mayhem, hot sexual tension, plenty of junk food, exploding cars, pot roast with the Plum family, and a viewing at the Burg's premier funeral home. SUMMER, 2008. IT'S STEPHANIE PLUM TIME. BE THERE. In Finger Lickin' Fifteen : SAVE THE DATE: Tuesday, June 16, 2009 EVENT: The fifteenth Stephanie Plum novel, in which complications arise, loyalties are tested, cliffhangers are revealed, and donuts are eaten. WHERE: Wherever books are sold across America WHAT TO BRING: sunglasses, insect repellant, a flotation device, suntan lotion, cheez-doodles, extra-large towel, fire extinguisher, baseball bat, lip balm, monkey leash, sixty-three pieces of chewing gum, and one canister of oxygen (don't ask). Hey, it's a Stephanie Plum novel