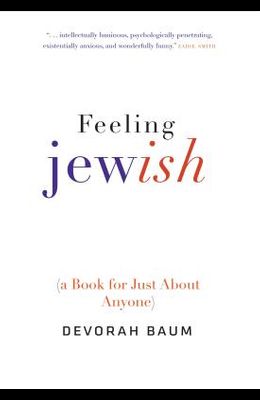 Feeling Jewish: (a Book for Just about Anyone)

In this sparkling debut, a young critic offers an original, passionate, and erudite account of what it means to feel Jewish--even when you're not. Self-hatred. Guilt. Resentment. Paranoia. Hysteria. Overbearing Mother-Love. In this witty, insightful, and poignant book, Devorah Baum delves into fiction, film, memoir, and psychoanalysis to present a dazzlingly original exploration of a series of feelings famously associated with modern Jews. Reflecting on why Jews have so often been depicted, both by others and by themselves, as prone to negative feelings, she queries how negative these feelings really are. And as the pace of globalization leaves countless people feeling more marginalized, uprooted, and existentially threatened, she argues that such Jewish feelings are becoming increasingly common to us all. Ranging from Franz Kafka to Philip Roth, Sarah Bernhardt to Woody Allen, Anne Frank to Nathan Englander, Feeling Jewish bridges the usual fault lines between left and right, insider and outsider, Jew and Gentile, and even Semite and anti-Semite, to offer an indispensable guide for our divisive times.