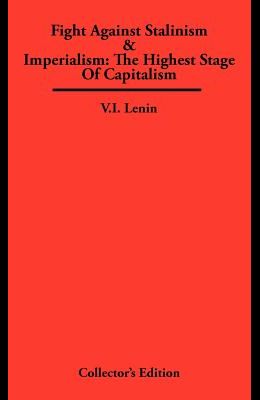 Fight Against Stalinism & Imperialism: The Highest Stage of Capitalism

The Fight Against Stalinism clearly demonstrates how in the last year of his life, Lenin along with Trotsky began a broad struggle against what was finally called Stalinism. This book documents Lenin and Trotsky's fight against Stalin on the improtant issues of the day - the state monopoly of foreign trade, the growth of bureacratism and the treatment of nationaal minorities. Ultimately, Trotsky was murdered by Stalin in the 1930's in Mexico. In Imperialism: The Highest Stage of Capitalism Lenin sites the importance of world trade in the beginning of the 20th century. Imperialism is a basic concept that Marx himself dealt with by analysis and debate which Lenin continued as competition created instability throughout the world. Instability caused international war, the emergence of international capital and an increase in industrial monopolies. Both of these books will give the reader an insight to Lenin's thinking during this critical period. His analysis contues to be applicable to modern times which we now call 'global' trade. A Collector's Edition.