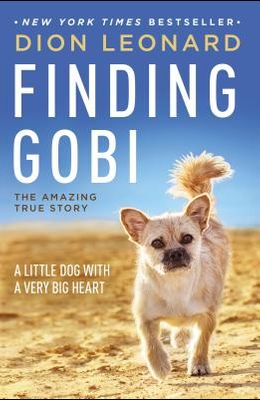 Finding Gobi: A Little Dog with a Very Big Heart

New York Times Bestseller List Leonard and Gobi's story represents the power of people working together and the profound depth of feeling possible between a man and his dog.--Publishers Weekly A man, a dog, and the lengths to which love will go to sacrifice for its companion. Finding Gobi is the miraculous tale of Dion Leonard, a seasoned ultramarathon runner who crosses paths with a stray dog while competing in a 155-mile race through the Gobi Desert in China. The lovable pup, who would later earn the name Gobi, proved that what she lacked in size, she more than made up for in heart, as she went step for step with Dion over the Tian Shan Mountains, across massive sand dunes, through yurt villages and the black sands of the Gobi Desert, keeping pace with him for 77 miles. As Dion witnessed the incredible determination and heart of this small animal, he found his own heart undergoing a change as well. Whereas in the past these races were all about winning and being the best, his goal now was to make sure he and Gobi's friendship continued well after the finish line. He found himself letting Gobi sleep in his tent at night, giving her food and water out of his own limited supply, and carrying her across numerous rivers, even when he knew it would mean putting him behind in the race, or worse, prevent him from finishing at all. Although Dion did not cross the finish line first, he felt he had won something even greater - a new outlook on life and a new friend that he planned on bringing home as soon as arrangements were made. However, before he could take her home, Gobi went missing in the sprawling Chinese city where she was being kept. Dion, with the help of strangers and a viral outpouring of assistance on the internet, set out to track her down, and reunite forever with the amazing animal that changed his life and proved to him and the world that miracles are possible.