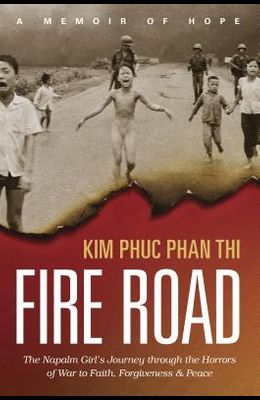 Fire Road: The Napalm Girl's Journey Through the Horrors of War to Faith, Forgiveness, and Peace

Get out Run We must leave this place They are going to destroy this whole place Go, children, run first Go now These were the final shouts nine year-old Kim Phuc heard before her world dissolved into flames--before napalm bombs fell from the sky, burning away her clothing and searing deep into her skin. It's a moment forever captured, an iconic image that has come to define the horror and violence of the Vietnam War. Kim was left for dead in a morgue; no one expected her to survive the attack. Napalm meant fire, and fire meant death. Against all odds, Kim lived--but her journey toward healing was only beginning. When the napalm bombs dropped, everything Kim knew and relied on exploded along with them: her home, her country's freedom, her childhood innocence and happiness. The coming years would be marked by excruciating treatments for her burns and unrelenting physical pain throughout her body, which were constant reminders of that terrible day. Kim survived the pain of her body ablaze, but how could she possibly survive the pain of her devastated soul? Fire Road is the true story of how she found the answer in a God who suffered Himself; a Savior who truly understood and cared about the depths of her pain. Fire Road is a story of horror and hope, a harrowing tale of a life changed in an instant--and the power and resilience that can only be found in the power of God's mercy and love.

From the Back Cover More than four decades ago, her excruciating pain was exposed in a photo that made headlines around the world. Only now is she fully revealing the depth of her scarring--to both body and soul. It's a moment forever captured, an iconic image that has come to define the horror and violence of the Vietnam War: Nine-year-old Kim Phuc running in agony moments after napalm bombs fell from the sky, bringing hellish fire that burned away her clothing and seared deep into her skin. Left for dead in a hospital morgue, Kim miraculously survived--but her journey toward healing was only beginning. When the napalm bombs dropped, everything Kim knew and relied on exploded along with them: her beloved home and village, her country's freedom, as well as her childhood innocence and happiness. Kim's coming years would be marked by agonizing treatments for her burns, incessant physical pain throughout her body, and being handled for political propaganda. Kim survived the pain of her body ablaze, but how could she possibly survive the pain of her devastated soul? Fire Road is a story of both unrelenting horror and unexpected hope, a harrowing tale of life changed in an instant. In this stunning first-hand account of struggling to find answers in a world that only seemed to bring anguish, Kim ultimately discovers strength in someone who had suffered himself, transforming her tragedy into an unshakable faith. From the flap (HC edition): GET OUT! RUN! THEY ARE GOING TO DESTROY THIS WHOLE PLACE! The soldier's commands left no room for ambiguity. . . . With us children leading the way, we fled the outbuildings; we ran toward the front of the temple grounds; we made our way from the property onto the adjacent road, Trang Bang's Route 1; and we pedaled our legs as fast as they could carry us as hell rose up to clutch earth. Seconds later, I caught sight of an airplane closing in on me. It was jolting to take in something so immense, so fast, and so earth-shatteringly loud, and the magnitude of its presence left me paralyzed there on the road. . . . Perhaps I would have stood there for an eternity, my feet unable to move, were it not for what I saw next. The fly-by was not an inconsequential event, for falling from that underbelly were four large ice-black bombs. . . . I knew I had to flee. These were not bombs that fell heavily from the sky, as I had heard that bombs would do; no, these bombs all but floated down. There was something sinister in those cans. Nooo! Nooo! I screamed to nobody but the air surrounding me, all of the other children and soldiers having disappeared into the dense clouds of smoke that now encroached. I will die here on this road. I will be taken to death in these flames.