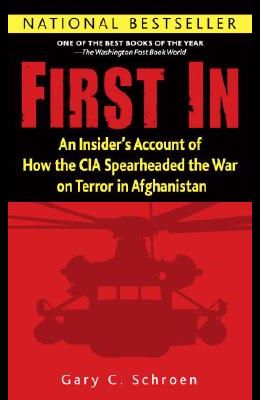 First in: An Insider's Account of How the CIA Spearheaded the War on Terror in Afghanistan

From a CIA agent who led the first team of Americans into Afghanistan after 9/11, this is the first book to explain the crucial role the agency played in defeating the Taliban.

From the front Cover While America held its breath in the days immediately following 9/11, a small but determined group of CIA agents covertly began to change history. This is the riveting first-person account of the treacherous top-secret mission inside Afghanistan to set the stage for the defeat of the Taliban and launch the war on terror. Gary Schroen was hardly expecting to take on such a job. Like the veteran officer in countless cop movies, he was planning for retirement when disaster struck. After 9/11, at age fifty-nine, he was drafted back for his most dangerous assignment: to lead a handpicked team of operatives deep into Afghan territory and prepare the way for an American assault. Comprised of seven agents, experts in fields ranging from communications to medicine to weaponry, the group called Jawbreaker found itself in hostile terrain while identifying targets for U.S. bombs and coordinating U.S. forces with the Northern Alliance (NA), the organized opposition to the Taliban dictatorship. Jawbreaker struggled to maintain coherence within the NA, which had been deprived of its charismatic leader Ahmad Shah Masood when he was murdered on September 9 by an al-Qa'ida bomb concealed in a camera. The success of Schroen and his group would mean the collapse of the Taliban, the disruption of al-Qa'ida, and the end of Afghanistan as a sanctuary for terrorists. Impeding Jawbreaker's progress was the absence of a Taliban infrastructure that could be targeted, a Pakistani government eager to interfere, and a rash and reckless U.S. government, that did not know the most effective way to attack. As thrilling as any novel, First In is a uniquely intimate look at a mission that began theU.S. retaliation against terrorism-and reclaimed the country of Afghanistan for its people.