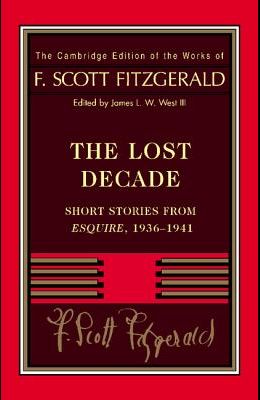 During the last six years of his life, F. Scott Fitzgerald was an Esquire author. Between 1934 and 1940, Fitzgerald sold some forty-five pieces of writing to the magazine - fiction, nonfiction, and personal essays. This volume of the Cambridge Edition includes thirteen short stories published by Fitzgerald in Esquire, together with the entire Pat Hobby Series -seventeen stories about an aging screenwriter scrambling to make a living in Hollywood during the 1930s. One other story - 'Dearly Beloved', submitted to Esquire but not published there - is included as an appendix. The volume provides restored, accurate texts based on Fitzgerald's surviving manuscripts, typescripts, and proofs. A textual apparatus records editorial decisions; explanatory notes identify people, places, literary works, historical events, and references to Hollywood actors, directors, and films. The volume also includes selected facsimiles of Fitzgerald's manuscripts and typescripts for the Esquire writings.