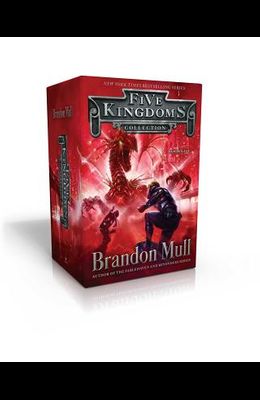 Adventure awaits in the Five Kingdoms--come and claim it with the first three books in the fanciful, action-packed ( Publishers Weekly , starred review) series from the #1 New York Times bestselling author of the Fablehaven and Beyonders series. Cole Randolph was just trying to have a fun time with his friends on Halloween (and maybe get to know Jenna Hunt a little better). But when a spooky haunted house turns out to be a portal to something much creepier, Cole finds himself on an adventure on a whole different level in Sky Raiders . In Rogue Night , Cole never meant to end up in The Outskirts, but when his friends were kidnapped, he had to try and save them. Now he's trapped in a world that lies between wakefulness and dreaming. Will he find them before it's too late? Cole ventures to a new kingdom as he continues his search for his friends--and also pursues his quest to mend what has gone awry with the magic in The Outskirts in Crystal Keepers . Can he overcome the challenges ahead, or will he be stranded forever in a world between reality and imagination?