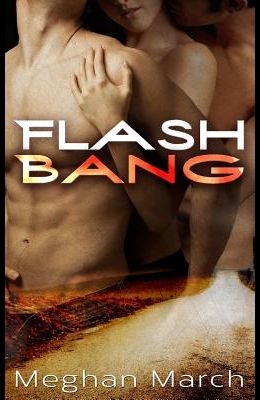 Book #1 in the Flash Bang Series
by
Meghan March

Rowan Callahan is a career-climbing slut. At least according to the vicious-and false-rumor that is destroying her professional life. But a little thing like her career as an attorney ceases to matter when a plane crashes in downtown Chicago and the entire city goes dark. Her unconventional upbringing makes her suspect the worst: she's just witnessed the kick-off to the apocalypse. Armed with a backpack of supplies, she leaves Chicago, intent on resetting her skewed priorities and seeking shelter at the family farm with her father and sister. She's injured and running for her life when she stumbles directly in the crosshairs of two men who just might be her salvation . . . and her greatest temptation.Graham Buchanan and Zachariah Sawyer are best friends and brothers-in-arms who have been indulging in m nages since before their Force Recon team served in Iraq and Afghanistan. They've hung up their uniforms to build a new life for themselves and their team at Castle Creek Whitetail Ranch-a rustic deer hunting preserve that covertly doubles as a doomsday prepper's paradise. They thought they were prepared for anything until Rowan comes crashing into their lives. Graham and Zach are convinced she's the one woman who can handle them both, but she has no intention of deviating from her carefully laid plans for longer than it takes her to recover from her injuries. So they propose a deal: they'll provide her an armed escort home, and in exchange, she's theirs until they part ways.It was the perfect plan; except once they've had her, they can't let her go . . .