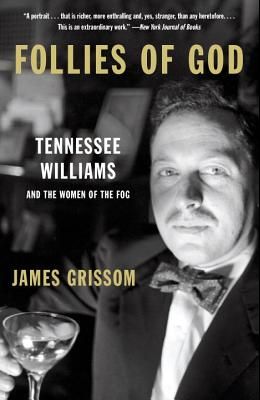 Follies of God: Tennessee Williams and the Women of the Fog

This remarkably illuminating portrait of Tennessee Williams lifts the veil on the heart and soul of his artistic inspiration: the unspoken collaboration between playwright and actor. At a low moment in Williams's life, he summoned to New Orleans a young twenty-year-old writer, James Grissom, who had written him a letter asking for advice. After a long, intense conversation, Williams sent Grissom on a journey on his behalf to find out if he or his work had mattered to those who had so deeply mattered to him. Among the more than seventy women and men with whom Grissom talked were giants of American theater and film: Lillian Gish, (the escort who brought me to Blanche), Jessica Tandy (the original Blanche DuBois on Broadway), Eva Le Gallienne (She was a stone against which I could rub my talent and feel that it became sharper), Maureen Stapleton, Julie Harris, Bette Davis, Katherine Hepburn, Elia Kazan, Marlon Brando, John Gielgud, and many more. Follies of God provides dazzling insight into how Williams conjured the dramatic characters and plays that so transformed American theater.