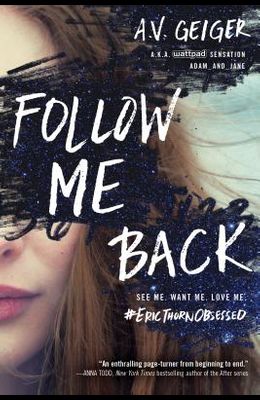 Follow Me Back is the perfect mix of fandom with just the right amount of suspense. An enthralling page turner from beginning to end. --Anna Todd, New York Times bestselling author of the After series Tessa Hart's world feels very small. Confined to her bedroom with agoraphobia, her one escape is the online fandom for pop sensation Eric Thorn. When he tweets to his fans, it's like his speaking directly to her... Eric Thorn is frightened by his obsessive fans. They take their devotion way too far. It doesn't help that his PR team keeps posting to encourage their fantasies. When a fellow pop star is murdered at the hands of a fan, Eric knows he has to do something to shatter his online image fast--like take down one of his top Twitter followers. But Eric's plan to troll @TessaHeartsEric unexpectedly evolves into an online relationship deeper than either could have imagined. And when the two arrange to meet IRL, what should have made for the world's best episode of Catfish takes a deadly turn... Told through tweets, direct messages, and police transcripts, this thriller for the online generation will keep you guessing right up to the shocking end.

Follow Me Back Series In Order - By A V Geiger